When we moved into our new digs at the Suburbanopolis County Courthouse, the designers had put long drawer file cabinets on every blank wall. The file room uses them. The IT staff does not. They are mostly empty and even the used ones are rarely labeled.
I fixed that. Friday evening, after everyone else had gone home, I stayed late and labeled everything.
My way.

So right across from my cube there is:
Dragons & Drakes - Utility Weasels - Wet Mice - Dry Mice - Well Fed Cats

Beside that is where we keep:
Uranium - Adamantium - Unobtanium - Naquada - Mithiril

And all the way in the back:
London Dispersion Forces - Dark Matter - Dilithium Crystals - Flux Capacitors - Ectoplasmic Residue

Back in the dark corner where no one goes:
Zero Point Energy - Alcubierre Drives - Lorentzian Manifolds - Krasnikov Tubes - Interdimensional Crossrips

While the help desk needed a supply of:
Reboots - Startup Chimes

I can’t wait for Monday.

I was in on the high level design meetings, sort of between the engineers and management, translating between the two. Once we had a design the engineers would disappear then return with plans. I had to take the plans, order parts & tools, and tell management who to hire, and set up labs & warehouses.

Certain details stand out:
We acquired a very old computer center, and had to convert it into something useful. What do we have, what do we need, where do we put it, what is that mechanawockle contraption anyway? Who owns it? Is it dangerous? Can we get rid of it? Should we keep it as an art piece?

A complex diving hard suit, with more lights & buttons than the space shuttle.
I and a co-worker were wearing version one suits while we acted as safety escort for the model three test pilot-diver. I was trying to memorize all of our observations because I had no way of taking notes. One of my observations was that the version four suit would have a way of taking notes.

And then the company died. Don’t know if the reason was legal or financial or just because I was about to wake up. There was no ‘Under New Management”. It just dissolved.
All the wonderful we had been creating for the last couple years just vanished.
Some co-workers were discussing their future job plans. Others were crying.

I had been doing so many wildly different things that I couldn’t figure out how to put it on my resume.

Tried out a new application today. One we're paying at least six digits for, maybe seven. It showed me this travesty:

Am I out of line here?

The first time I gave our contractors servers, they never renamed them. That led to having six pairs of servers with identical awful names like s80w2k8mb13 and stuff.
So the next time I gave them servers, I gave them George and Gracie with the expectation they would be renamed. They never were.

I would love the opportunity to give them Bud & Lou, Stanley & Oliver, Moe/Shemp/Larry/Curly, or maybe even the whole Marx clan, but having started with Burns & Allen, I'm more inclined to stick with a more obviously Vaudeville theme.

So… I'm giving them exactly one server tomorrow. What should I name it?

One tube of spicy hot breakfast sausage, browned and crumbled.
One stick of butter. melt in.
1.5 cups of flour, stir in until lumps are gone.
3 cups milk. Use lowfat milk just to thumb your nose at the universe.
1 tablespoon of garlic
1 tablespoon of basil
1 teaspoon of oregano
Simmer until its thick enough to slice.
Serve over favorite pasta.
Have heart surgeon on stand-by alert. 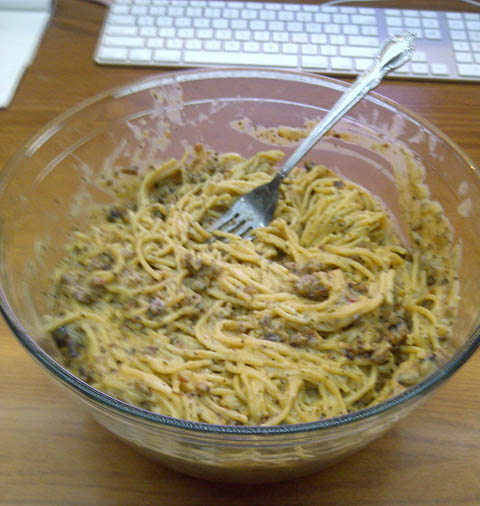 Its a perfect day to rake the leaves. They've been falling heavy the last couple days, its a weekend, and a really nice fall day.
But chances are good that the coming hurricane is going to ruin all that hard work.
Nevermind. I'll rake the family tree today instead.

I think my resume is complete, except for one bit: The first line.
"Professional IT generalist with over thirteen years experience performing a wide variety of IT tasks"
Is the perfect line for the job I have now.  There are so few of us handling so many systems that we all have to be everything: database programmers, printer repairmen, network engineers, technical writers, systems analysts, systems administrators, and systems babysitters.

And this line is totally inappropriate for the job I'm looking for.
The boss says he is looking for someone who can look at what we're doing and know if we're doing it right, or find out how we can do it better. Someone who can envision the future, devise a practical path to get there, and implement it.
As a jack-of-all-IT-trades I've done enough of this sort of thing that I believe I can do this as a primary duty.

But how do I say it?

Monday I went on a banking adventure with my probate paperwork in hand. I think I lost.

CreditUnion said "I'll take all of this, give it to someone else to deal with, and let you know, goodbye."
VirginiaNationalSoveranNationsBankOfAmerica processed everything in real time (2 hours!) but would only give me a check made out to my sister and me both - which, us being 900 miles apart, I don't think can be deposited anywhere on Earth.
Meh.

Just before I left for work this morning, I noticed PsychoMouse had wedged himself between the water bottle and a corner of the cage. He has done this before, and I usually go bother him until he climbs down. I tried all the usual tricks, tapping the glass, moving the water bottle away from the corner, even blowing on his face and still he didn't move. In fact, he was breathing very hard, shivering, and the whole left side of his face was wet and matted.
"You're totally stuck, aren't you? How long have you been there?"
I don't know of it was his teeth or a whisker or what that got stuck under the spring that holds the water bottle up. I carefully pulled up the spring while he helplessly buzzed his foot at me, and suddenly he fell. Much grooming commenced. I ended up 30 minutes late for work.

He looks a lot better this evening.

PsychoMouse has adjusted to his aquarium based life fairly well by now. He can hear all the sounds I and my house make without running around in panic or hiding. He will even warily watch me walk across the room before going back to eating. Nothing short of the vacuum cleaner fazes him anymore.

If I place an M&M on my desk and slowly squeeze it until the shell cracks, the poor little thing acts like he has just been electrocuted.
Collapse